We are still open for essential workers

Please feel free to explore each of the cottages in more depth using the links below:

Knotts Farm Holiday Cottages are associated with Out to Play Golf to bring you the best discounts for playing golf.

While staying at Knotts Farm Holiday Cottages, we understand you may just want to sit and back and relax and enjoy the view. We also understand that you might want to get out and about and see what the beautiful county has to offer. See below for some ideas, but if you have a specific enquiry then please get in touch.

Staying at Knotts Farm offers you some great opportunities to play golf at some of the most visually stunning golf courses in Britain. Knotts Farm have teamed up with ‘Out to Play Golf’ to offer staying guests discounts when playing at nearby golf courses, anything from 10% discount, to 2 Green Fees for the price of 1.

Please send us an enquiry, or give us a call for more details on what golf course discounts you can expect
when staying at Knotts Farm. 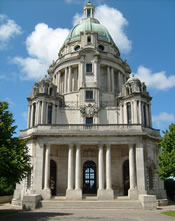 Situated in Williamson Park, The Ashton Memorial is a visually stunning which provides superb views of the surrounding countryside and across Morecambe Bay. From the viewing gallery of The Ashton Memorial, the Lakeland hills are clearly visible and it is possible to see Blackpool Tower and the Isle of Man.

Williamson Park is situated in a commanding position overlooking Lancaster City Centre, and is situated on the site of a former quarry and open moorland to the east of Lancaster. During the 1990s the acquisition of the area known as Fenham Carr has brought the area of the park up to 54 acres.